Struggling with the pandemic 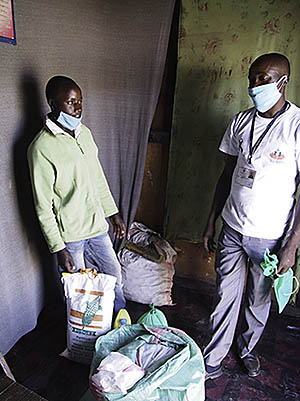 When St. Martin CSA reached them, Daniel and his four siblings had just moved to yet another place because the former housing situation was not sustainable. Daniel is a young man of 18-years that had to take over the responsibility as head of the family after his mother died. He had to quit school and provide for his siblings with different temporary jobs. His mother had contacted St. Martin CSA to seek advice in a dispute with her husband. Shortly after that, she fell ill and died. The husband disappeared, and the extended family refused to care for the five children. St. Martin CSA provided them with foodstuff and is organising vocational training for Daniel so that he can continue his education and at the same time earn some income for him and his siblings.

The measures to contain the COVID-19 pandemic also included the closing of the courts. This affected Janet, who had a case that awaited judgement. Her brother had tricked her mother into selling most of her land and transferred the money to his own bank account. Janet asked St. Martin CSA for legal advice and succeeded to freeze the bank account. Consequently, the brother evicted them from their house, and Janet had to give up her job to care for the ailing mother. She moved with her and a daughter of her own into an empty one-room shop, where the COVID-19 measures caught them: The courts closed down, and the opportunities for casual work decreased significantly. Janet didn’t know how to pay for the medical care for her mother, and when St. Martin CSA contacted them, they were down to the last packet of rice. The ERP programme supported them with foodstuff for two months and with medical therapy for the mother. 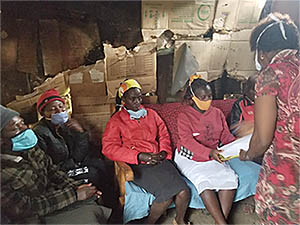 Margaret, 56 years old and a former alcoholic, lives in a small hut made out of corroded metal sheets and carton. She washes clothes and does other casual work to feed her 13 grandchildren. Her four children all struggle with addiction issues and HIV. Providing for these many people is a challenge in normal times, with the COVID-19 restrictions it became near to impossible. Also, Margaret became ill a few months ago and couldn’t leave the bed. The neighbours supported her family with whatever they could, but when St. Martin CSA arrived, there was no food in the house, not even a fire was lit. Margret was very grateful for the food. St. Martin volunteers pointed out that there were several beneficiaries in the neighbourhood who were not able to take their anti-HIV-drugs in the recommended way because they also had no food. Hence St. Martin CSA provided some additional foodstuff for them.

We’d like to thank all our donors and supporters for making it possible to help these people and many more. Asante sana!