Footsteps of Gratitude and Openness

Restoring the Dignity of 500 People with Mental Illness

As we celebrate 20 years of St. Martin CSA’s existence this year, we wish to share our joy and gratitude with you for being a part of this journey. Our theme this year is “Footsteps of Gratitude and Openness”.

Our Gratitude goes to you, our friends, supporters, sponsors, donors and volunteers for your generous commitment and resources. You have been our inspiration while working with the vulnerable amongst us. Through your support, we have been able to touch and transform the lives of children with disabilities, survivors of violence, children in need of protection and care, people suffering from HIV/AIDS and addiction, as well as the communities that surround them.

We also take this moment to convey our Openness to change. We are far from completing and fulfilling our mission and we believe there is much more to commit ourselves to. There are new areas of concern, new challenges that await our response: People dealing with mental illness are one of the groups we are starting to journey with.  For this reason, we ask for your support as we implement a new 3-year project on mental health that will run from April 2020 to March 2023.

This venture was informed by a study conducted by St. Martin and media reports that have highlighted growing mental illness cases. The study revealed that mental illness is a significant challenge in the target area and the need for assistance is great. The study further revealed that stigma, lack of access to medical care occasioned by the high cost of consultation and medicines and transport to seek professional support as well as false information on mental health are the main contributing factors to the low levels of community capacity to address the problem.

The Community Programme for Addiction and Mental Health is currently implementing a 2-year pilot project on mental health (April 2018- Mar 2020) that has justified why this project needs to be undertaken. Based on the review of the pilot project and the great need for intervention, St. Martin CSA wishes to increase its coverage of patients from 30 to 500 as well as enhance the capacity of their families to support and care for them. Additionally, the project will carry out activities to positively influence the attitude of the general community in a bid to reduce the stigma of patients with mental illness and their families face.

The Story of Paul

When the neighbours build a house for you 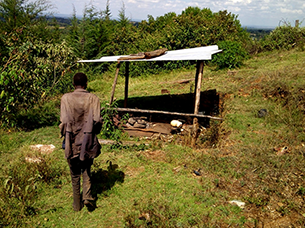 In early October 2018, a local volunteer from the small town of Ol Jabet alerted St. Martin CSA of a person living in the community with a severe mental health issue. The volunteer had joined St. Martin CSA several years back and worked with the Community Programme for Addiction and HIV/AIDS, which also runs the new department of mental health. She had therefore been trained in identifying possible cases for intervention by the department.

When the team fromSt. Martin CSA arrived at the site, they were greeted by a couple and their children. It turned out that they were the owners of the little farm the team had been called to. The person with the mental health problem, let’s call him Paul, was the owner’s brother and was living with them. The couple told the team that Paul had been brought there by his mother some years back because she didn’t know how to handle his condition any more. For his brother and his family, Paul’s behaviour had become very erratic and they had started to fear for themselves, but especially for their young daughters. 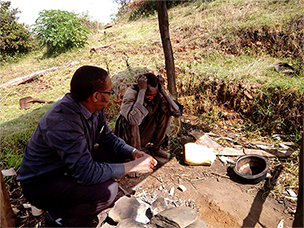 Finally, the team from St. Martin CSA called Paul – who at first refused to see people that he didn’t know. After some persuasion, he agreed to meet the visitors. But when he realized that the visiting team contained some women, he refused again, saying that he was not properly dressed. And indeed, after the women from St. Martin CSA went back to the car, a half-naked man presented himself. The social workers talked to him and quickly understood that Paul needed medical assistance. At one point they asked if they could see where he slept and they learned that Paul had his own little house behind the one of his brother’s. So they went there – only there was no house. Just a dilapidated piece of roofing on four posts with a heap of random material that formed the outline of a small hut. Paul invited his guests into the hut, pointing out an imaginary door. Following Paul’s invitation, the social workers sat down on an equally imaginary chair – that was heavily infested with fleas. Later they learned that Paul had used up his hut piece by piece to fuel his cooking fire and refused any help or intrusion by others. 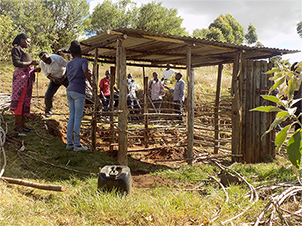 The social workers returned to Nyahururu deeply touched and worried. Sleep was difficult to find on this night, especially because there was heavy rainfall and Paul’s roof couldn’t really shelter him. After some discussions and arrangements, they returned and convinced Paul to see a doctor in the hospital. There he was diagnosed()and received medication. Meanwhile, the social workers called for a meeting of the neighbours and the wider community. They explained the situation; that Paul was being cared for now, but he still needed a new house. They appealed to the good-will of the community. And promptly, someone donated a piece of metal roofing, others building material or furniture. The following weekend all the neighbours brought their contribution to Paul’s place and built a new house, ready for Paul’s return. 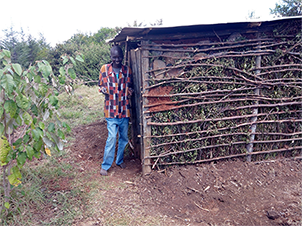 Today Paul is much better and very happy with his new house. He plans to add the outer mud-plaster layer when the rainy season starts. He is joking with the neighbours and helps them with small tasks. And he even went visiting his aunt and contacted his mother. His brother’s family is very happy and relieved too. The wife said to the social workers: “You know, you may think that Paul was ill. But I was even more ill. By helping him you have healed me and my family too.”

The story of Paul is but one story of the 30 people living with mental illness that the Community Programme for Addiction and Mental Health of St. Martin CSA and her 56 volunteers are dealing with.  They were identified for support through a pilot project that was initiated in 2018 and which is coming to an end in March 2020.

The Story of Kinyua

The Story of Gilo

Use this form to make an online donation. You can choose whether you want to donate to a particular activity or to St. Martin in general.

Note: We recommend that you use a bank transfer only for bigger amounts to save on transfer fees. Choose PayPal for smaller amounts, PayPal allows paying with a creidt card.

If you prefer a more anonymous way of donating please contact This email address is being protected from spambots. You need JavaScript enabled to view it.