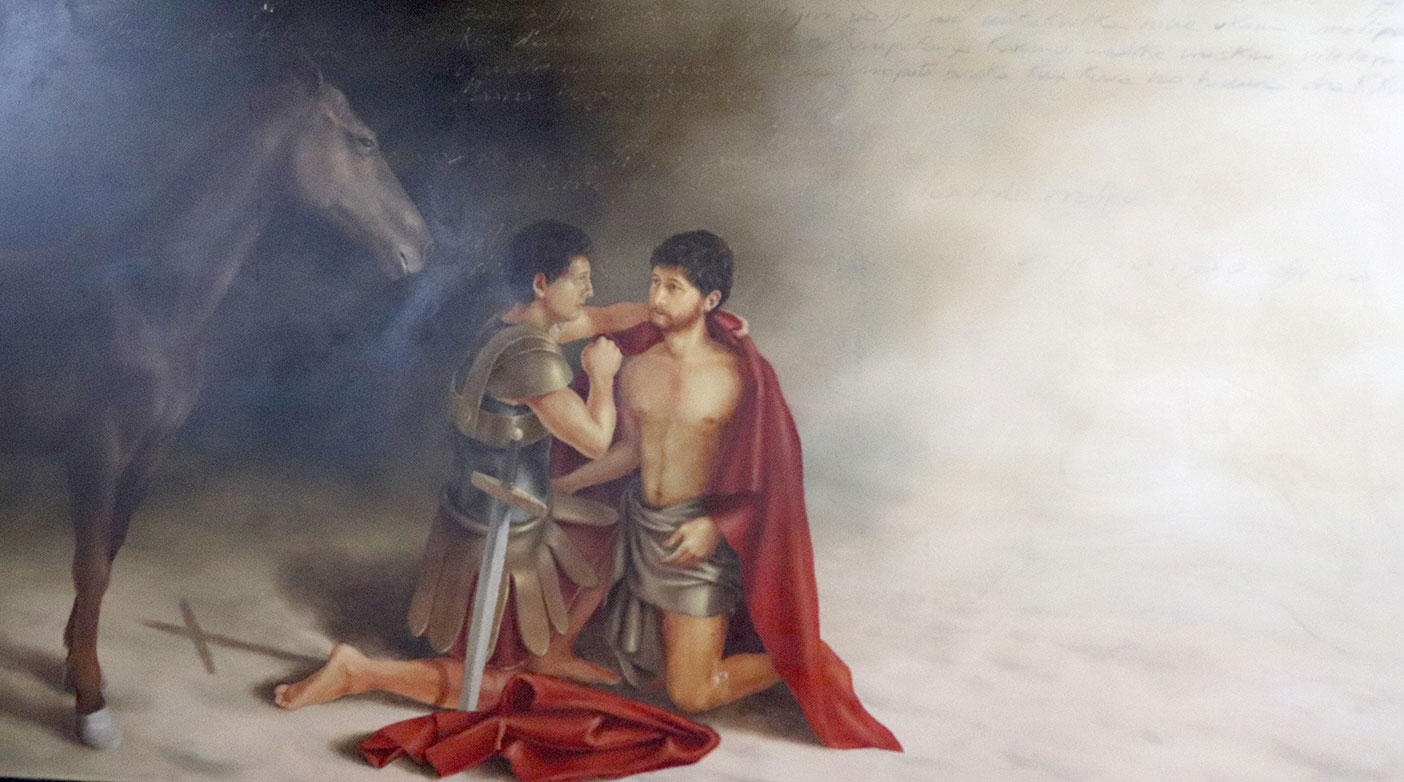 St. Martin of Tours is the Saint after whom St. Martin CSA was named. The life of this saint seemed to relate so well to the work of the organisation that it became an obvious choice.

Martin of Tours was a soldier. After his conversion when he was called up, he refused to go into the battle. He was challenged by Julius Caesar and accused of cowardice, but Martin replied that he was ready to go to the frontline, only armed with the cross of Christ. During his whole lifetime, Martin remained a great promoter of peace and a non-violent lifestyle. Even after he had become Bishop he was called all over Europe to reconcile warring parties and to build peace. His actions remain an inspiration to our work in the field of Active Non-Violence and Human Rights.

The event in Martin's life that is most famous is his encounter with the poor man during a very cold day in the wintertime. The man was almost naked and was begging along the road. Martin was struck by the suffering of this poor man and on the spot cut his long mantle into two pieces and gave one half to the beggar to cover him. That same night, Martin saw in his dream Jesus, now dressed in the part of the mantel, which he had given to the poor man. This dream became a turning point in the life of Martin. He came to the understanding that he could meet Jesus in his needy brothers and sisters. From that time onwards Martin dedicated his life to the poor and neglected people.

Many paintings have been made of Saint Martin of Tours. Many depict the most famous event in Martin's life, the encounter with the poor man, with whom he shared his mantel. In these paintings, Martin is usually portrayed sitting on his horse and handing over the piece of his mantle to the beggar. The painting hanging in St. Martin's hall shows the same event, but with some differences that represent the spirit of St. Martin.

When looking closely at the painting, one will notice some writings. These writings are quotations in English and Kiswahili from the bible, which are part of the biblical basis of St. Martin. For example: "Freely you received, freely give" and "Anything you did to the least of my brothers, you did it to me". These writings were engraved on the first coat the artist painted on the canvas. For him they were like a prayer; he wanted to be inspired by the writings while creating this piece of art. In the same way, we can be inspired by the gospel of service while doing our work for the poor.

Contrary to many paintings of Saint Martin of Tours, in this picture Martin does not sit on his horse: he kneels down to share his mantle with the poor man. Both sit at the same level; they are equals and they look in each other's eyes with love. The sharing of the mantle is not an act of charity only; it is an act of love. When we work with the poor we should lower ourselves to their level and first and foremost love them for whom they are.

The most striking thing on the painting is the way the poor man is portrayed. He does not look miserable, thin and dirty. Instead, he looks healthy and strong; he is a smart young man. He is even the most central figure in the picture: we can see his face clearly. This is to visualise the idea that we need to see the poor and the weak differently. The poor and the weak are not only a problem; they are not only miserable; they have their own dignity and can be a resource as well. It is the poor who can help us change our hearts: to increase in love, to grow in solidarity. Martin helped the poor man with his mantle, but in the process, the poor man did something even greater to Martin: he helped him to change; he helped in his conversion.

The change in Martin can be seen in the dark and light side of the painting. On the left we still see part of his horse, standing in the shade, representing his past, the way he used to live. He used to consider himself an important and respected person; He was mainly concerned about himself. But the encounter with the poor man became a humbling experience for him; He turned into a different person who could share in love his life with those who were less fortunate. This is visualised by the bright side of the picture, the side that Martin is facing towards.

Looking carefully at the faces of Martin and the poor man, we will notice that they have the same face. They look alike. This visualises that we are neither entirely strong not entirely weak. We could identify ourselves with both persons, with Martin when we desire to share our mantle with the poor man. But we could also identify ourselves with the poor man which at times is more difficult for us to imagine. We come to realise that we are unable; that we have weaknesses and that we need to be helped. That our love is insufficient, that we are not able to open ourselves and our hearts to others, that we fear to be hurt or to lose and build all kinds of defence mechanisms to avoid this.

Martin has put his sword, his weapon of defence, aside. He does not need it anymore in his new way of living. The weapon that he needs is love. In the painting the weapon becomes a cross (the shadow on the ground) meaning that we are called to implement the gospel of service, to follow the path of Jesus who was full of God's love for mankind.

The face of Martin and the face of the poor man is a self-portrait of the artist. In this way he made himself part of this special encounter of Martin with the beggar, taking part in this moment of sharing. We could all place our faces in the picture, becoming part of such an encounter, experiencing the love between the two.
The painting does not show the environment in which the encounter took place: it is a timeless event; the same can happen again in any place and under different circumstances. In meeting the poor, we have a chance every day again to make a change in our lives, to grow in love and to grow solidarity.

This painting was specifically made for St. Martin by Giovanni Canova. 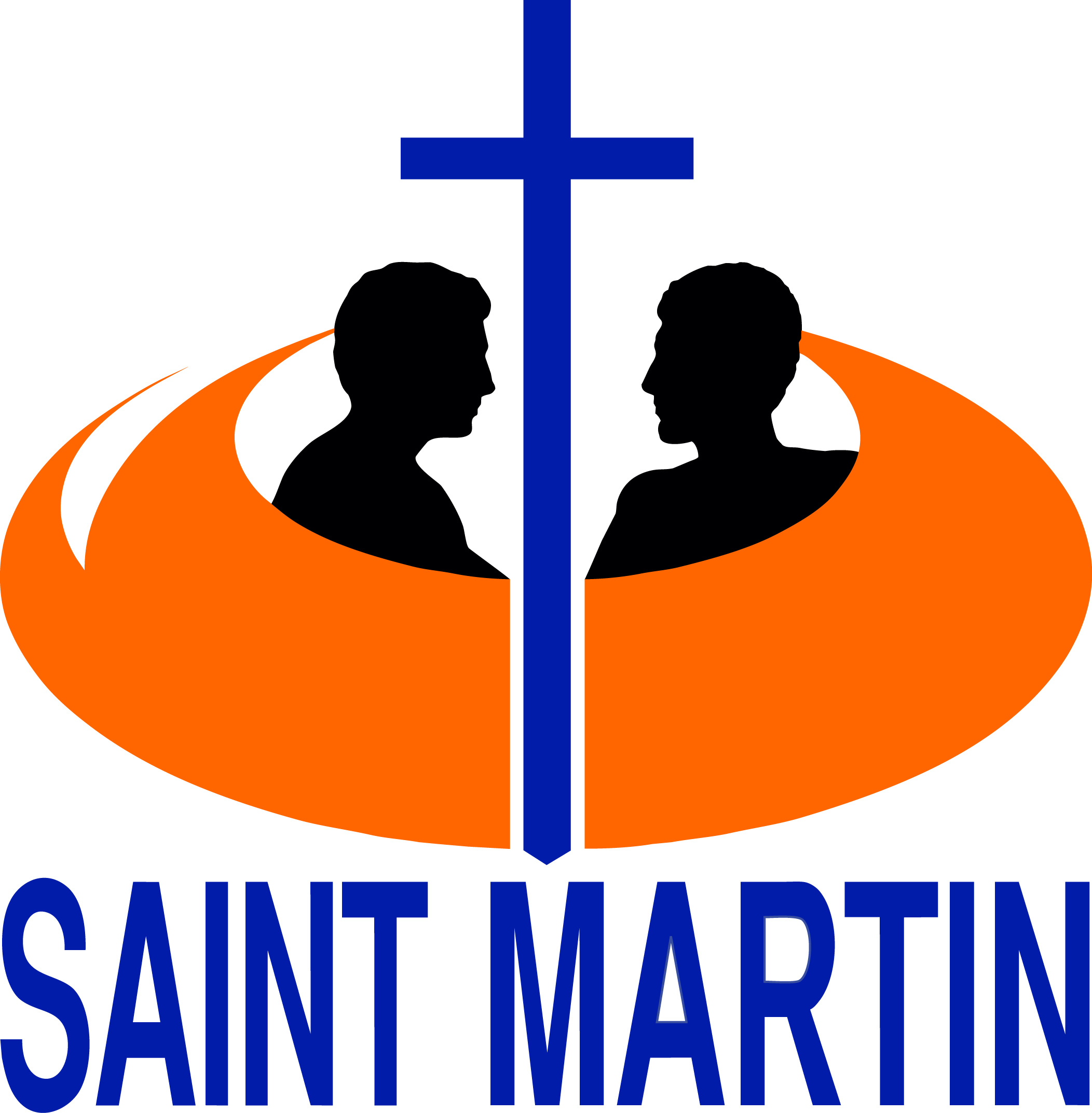 The blue sword in the logo is the sword, which was used by St. Martin to cut the mantle into two pieces and share it. It also symbolises the two-edged sword as mentioned by Jesus: the sword that is compared with the Word of God. The word of God should be our strength and our only weapon to use. In our logo, the sword is also a cross. The cross stands for our Christian faith which keeps motivating us in our work.