The CPPR was started in 1997 by a small group of community members who were concerned with the increasing number of cases of political violence, particularly the local crisis that culminated in the  Ol Moran incident where 30 people were killed and which gained international attention.

That and other incidents of human rights violations convinced St. Martin CSA to set up a community programme for peace and reconciliation. Inspiration was found in the work of ChemiChemi ya Ukweli (Fountain of Truth), an organization located in Nairobi and the international movement on active non-violence.

The programme is currently running two projects: - Awakening suppressed voices project which focuses on Gender-Based Violence (GBV). It works with the communities to strengthen their capacities in preventing and addressing GBV.

Dumisha Amani project envisions an entrenched culture of peace and non-violence among communities of Laikipia County. It focuses on strengthening the community capacity in addressing conflicts amicably and working towards communities’ cohesion.

CPPR employs a multi-sectoral approach and involves stakeholders from all the sectors, rights bearers and the duty bearers.

"I was brought up in a family of 6 (4 boys and 2 girls). We grew up knowing that women and girls must not speak or even stand up when speaking to men in whichever forum - whether at home nor in the community. No woman or girl is supposed to greet a man unless he initiates the greetings.

At school, my brothers monitored my every move and reported any ‘misbehavior’ to my parents with dire consequences.  I thought this was love and care until later in life I learned differently. Like many girls, my voice was being suppressed.  During one school holiday, I was invited to visit an aunt who lived across the ridge. At her place, I met 10 other girls, some known to me. That night we went through the cruel cut. We didn’t have a choice, neither a voice. We had been socialized to a culture of silence.

Three days later, I was married off to a 57 years old man as a third wife. This was the most painful and traumatic experience I have lived through. It had both short term and long term consequences that torture me to this date."

Matilda is today actively involved in organizing and facilitating community dialogues to stop female genital mutilation in her community.

The many faces of gender-based violence 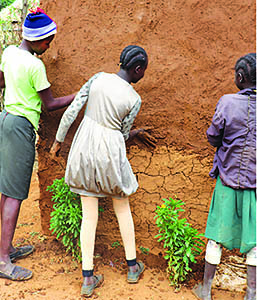 16 Days of Activism Against Gender-Based Violence

lt is the dream of every mother to raise her children in a safe, caring and loving environment. However, this dream is cut short for many mothers by escalating cases of gender-based violence (GBV) in Kenya. GBV is the most extreme expression of unequal gender relations in society, and a violation of human rights, as well a major hindrance of the achievement of gender equality. lt dents the dignity, health and personal security of its victims as well as survivors. lt is equally detrimental to the development of the society in general leading to a negative effect on the economy of states in the long run.

Purity is one of the thousands of women who undergo violence in Kenya. She is a mother of 3 children and was happily married before her last child was born. 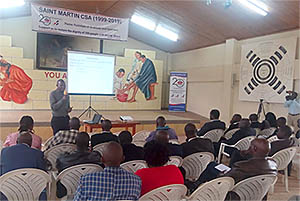 On June 20, St. Martin CSA got an opportunity to host chiefs from Nyahururu Sub County for a mediation training that was organized and facilitated by the Nyahururu Court Users Committee. The training was implemented by the Community Programme for Peache and Reconciliation CPPR.

The Importance of Participating

Recently the Community Programme for Peace and Reconciliation (CPPR) launched an activity geared towards mobilizing members of the public to participate in the county governance. It aimed to educate and sensitize the public on the importance of participating in public life, especially during the budget-making process.