Community Program for People with Disabilities

Over 20 years ago, a Catholic priest had a life-changing encounter with a man called Thomas. Thomas was disabled and had been hidden in a dark room never to see the light of day for more than 20 years. He led a lonely life as he had only minimal contact with the rest of the family. He was fed but that was about all he received from his relatives.  He could not access most of his rights as a human being.

Thomas came from a community where stigma around people with disabilities was very high. There were stereotypes around families of children with disabilities which were intertwined with traditional belief systems. Thomas and his family would, therefore, live a life of suffering caused by rejection from the community.

Having been moved by the circumstances and the life of Thomas, the priest mobilized his parishioners and embarked on a mission to identify other people with disabilities. Many were found hidden in the homesteads. Having seen the magnitude of the problem, there was a need to increase the awareness for the needs and rights of people with disabilities, move the community towards accepting these people and their families and mobilize resources to care for them. This mission brought forth what is today the Community Programme for People with Disabilities.

For over 20 years, the Programme has continued to create awareness for disabilities to debunk disability-related myths, to expose the plights of people with disabilities, and to move the community towards being more inclusive and supportive of people with disabilities. Every year the programme supports nearly 1000 children under community-based rehabilitation which include health, education, livelihood, and empowerment. The programme involves a network of trained volunteers recruited from the target areas to carry out its activities.

In the last strategic year (2017-2018), 147 community volunteers were trained on awareness and mobilization, disability information and basic therapy provision. Consequently, the programme involved the community to raise Kshs. 513,725 in cash and un-quantified support in kind to address the plights of children with disabilities. 121 beneficiaries were placed in different learning institutions, 1041 children were offered therapy and 76 caregivers received counselling services.

In 2019, the Programme will embark on a new journey to integrate with L’Arche Kenya an organization dealing with intellectual disabilities from where it will continue offering its services. CPPD beneficiaries were the first members of L’Arche Kenya during its inception in the year 2008.

When Ahmed was born, his family was considered fortunate; they had been blessed with a baby boy. The young family could not imagine a better situation. This changed when everyone realized that Ahmed had been born with a disability. This disability, in the eyes of many, was a curse.

The case of Ahmed was brought to the attention of a volunteer and Ahmed had to undergo corrective surgery. The operation was expensive and the family was not able to raise the funds required. They sought assistance from friends and well-wishers in the community. The community volunteers created awareness and initiated a process of mobilization. It was challenging to bring together people of different faiths to assist the Muslim family, but it was finally achieved. A fund-raising activity was held at the Mosque were people of different faiths gathered to share life with the family of Ahmed.

Children are safer at home 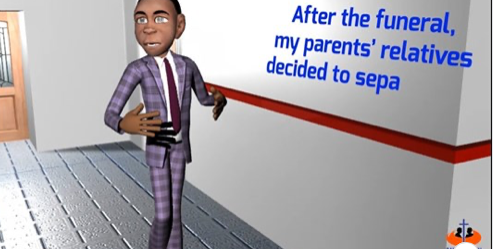 The Community Programme for Children in Need has released a new animation that explains why children are safer at home than in an institution (children's home). With gratitude to our partner Kindernothilfe E.V.

Working in a pandemic

The coronavirus pandemic affects also the work of St. Martin CSA. With the lockdown and social distancing, many of our usual activities had to be halted or re-organised. And at the same time, new needs appear in the communities that need to be addressed. Simon Maina, coordinator of the Community Programme for Children in Need, explains how his team is dealing with the situation.

Corporal punishment is still widespread and causes much suffering among our children and youth. It can lead to mental disorders, fear and anxiety and poor academic performance among others.  This video by St. Martin aims at raising awareness and demonstrate some alternatives to corporal punishment.