We want grass, we want peace 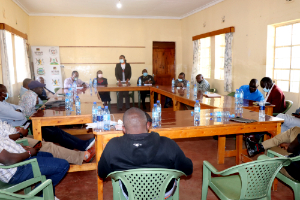 On a sunny afternoon in Ol Moran Ward, Laikipia county, members of county assemblies from Baringo, Samburu, Isiolo and Laikipia have gathered to discuss issues of peace in their respective communities. One member cuts short his speech and steps out to receive an urgent phone call.  After a few minutes, he comes back looking weary and deeply bothered by something. He tells us that his ward has been attacked by armed bandits who are now on the run with hundreds of cows, goats and sheep. He was also informed that one person was killed and several others injured.  His people are now fleeing their homes out of fear of further attacks.

Such stories of pain and suffering are common in Laikipia and the neighbouring counties of Samburu, Isiolo and Baringo. The media has reported loss of livestock, human life and displacement of families due to conflict in Laikipia County.  Schools are closed while some register low attendance for fear of attacks. It is these and other stories of suffering that motivated our Community Programme for Peace and Reconciliation to partner with the Amaya Triangle initiative to facilitate dialogue between grassroots leaders from the four counties. Members of County Assembly (MCAs) from frontier wards were specifically targeted for this candid dialogue.

In the discussion, it emerged that the drought has pushed the pastoralist communities to Laikipia in search of pasture and water. These herders are often viewed with suspicion and easily labelled as criminals but their need is genuine. “Tunataka tu nyasi, sis hatuna ubaya- We only want grass and we no quarrel with anyone.” said a participant in the meeting. He went further to note that some ill-intentioned people often leverage on drought to steal peoples livestock which they do forcefully sometimes causing death. He said that such people should be treated as criminals and should not hide behindf a certain ethnic group. Another member noted that there was a need for dialogue between those migrating to Laikipia and their hosts so that they reduce chances of criminals taking advantage of the situation to cause conflict. “Sisi tunataka tu Amani, kama tuko na nyasi tutawakaribisha lakini inabidi mtuambie mnakuja- We only need peace and should it occur that we have grass, we can always allow you to bring in your livestock but it would be good to request for the same.  The meeting about peace became a forum about grass which would justify a famous Laikipia saying: Grass is peace.

Conflict in Laikipia is complex and difficult to solve. It’s about people’s livelihood, about people’s lives which is also affected by diversity in terms of ethnicity, political standing and other factors. The MCAs pledged to take more time retreating in order to seek lasting solutions to conflict in the area. They further agreed to rally their local communities to stop the attacks and to prevent further loss of lives and property. Our Dumisha Amani project will continue to engage these leaders and other community resource persons in pursuit of peace. Meanwhile, we monitor the situation and continue supporting children in these areas to go safely to school.