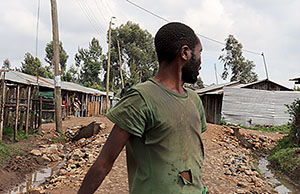 A personal blog by Samuel Murage

In our work, we encountered three voices that were important to the people in responding to mental illness; the Christion, the traditional, and the medial voice. It was easy to dismiss one, and prefer another based on individual values and backgrounds, but all three voices were important in bringing healing to the person with mental illness and his/her family members. Unless those deeply held views weren't addressed in unashamed conversation, there was no healing in sight. Regardless of the voice, in the end, everyone wanted to heal in the sense of a holistic, and transformative process of repair and recovery in mind, body, and spirit. Ultimately, all want to achieve positive change, find meaning in their life, and move toward self-realization of wholeness, regardless of the presence or absence of disease, (Global Advances in Health and Medicine, 2015). Interestingly, this healing was more visible/important to the caregivers and relatives of a person with mental illness than the person him/herself who needed to become sound or healthy again. Having a person with mental illness in the family resulted in stigmatization and abandonment by friends, relatives, neighbours and the community as a whole. This increased the sense of isolation and restricted the participation in social activities of an affected family. People with mental illness did not suffer alone, but with their family.

Let’s look at the Christian voice first. In our pilot project, we encountered many religious leaders and faithful mainly Christians. In mental illness, we realized religion was a double-edged sword, with variations according to the practices and dogmas of different faith communities. We encountered religious voices that believed in a vengeful and punitive God. Mental illness was attributed to sins and evil spirits. The only expiation to this was the repenting of sins. Time and effort were committed to exorcising demons through prayers and purification.  Other Christians took a scientific approach to mental illness encouraging medical attention. This too was combined with prayers in light of what some health facilities call “we treat but God heals”. Christianity offered people something to believe in and provided a sense of structure for understanding and coping with mental illness. However, in all cases, people with mental illness who exhibited “abnormal” emotions and behaviours were left out in religious life.

Secondly, the African way of understanding diseases was another important voice. Many African communities still rely on traditional health care defined by the World Health Organisation (2001) as, “the total combination of knowledge and practice, whether explicable or not, used in diagnosing, preventing or eliminating physical, mental and social diseases. The practice exclusively relies on past experience and observation handed down from generation to generation verbally or in written form”. After the introduction of Western medicine, the health care system and Christianity, Traditional health care has lost some significance and roots. However, in the recent past, the traditional system has gained prominence among the Agikuyu who were the majority population in the pilot project area.

In the traditional voice, mental illness was and still is explained as a curse for the non-observance of certain rituals or taboos. Mental illness carried a mystery that was hard to understand and therefore it was related to the supernatural world of spirits, the ancestors and the living dead. To treat the sickness, certain rituals must be conducted to cleanse the person and appease the spirits. I listened to that voice in a nuclear family with three people with mental illness and five more within the extended family. The Agikuyu elders studied the genealogy of this family stretching to the last remembered matriarch or patriarch. They carefully examined how dowry negotiations were made where given words were not fulfilled and identified key actions for resolving g the issue. This was a first for me. I understood this family had sought medical help and faith healing and nothing seemed to work.  It was physically and emotionally trying and made the family members vulnerable to the opinions and judgments of others. All they needed was healing!

After reviewing existing literature and science on mental health, St. Martin entered the project area with the voice of science and joined the existing voices on mental health from the Ministry of Health. We understood mental illnesses as a brain-based condition that affects thinking, emotions and behaviours. The brains of people with mental illness had changed in a way in which they are unable to think, feel or act in ways they want to. The fact that we all have brains means that there is a possibility for all of us to experience some mental health problem in our lifetime.

In our community dialogues, we learnt that limited knowledge and limited access to quality mental health care services had contributed to devastating beliefs about the causes of mental illness which affected the response to mental illness treatment. This had provided fertile ground for the other two voices to dominate and provide alternatives in understanding and responding to mental illness that was detrimental to people with mental illness and their families. People became honest with their inner pain, frustrations in seeking help and shortcomings in response instead of hiding them.  Individually and collectively, people started understanding the foundation of their faith, culture and science and the centrality of inalienable human rights including the right to quality health care.  They realised that learning together expands our thinking on mental health. And we also understand that what today is heard as the cultural, biblical or medical voice might look ridiculous and cruel tomorrow with increased research in mental health.

The community-based approach of St. Martin CSA has proven to us that none of the three voices can stand alone. To obtain sustainable solutions for people with mental illnesses all three need to work together: The medical treatment needs to be embedded in the culture and beliefs of the people where religion can often provide a structure to enter in a dialogue about difficult topics.

“It is not the bruises on the body that hurt. It is the wounds of the heart and the scars on the mind.”